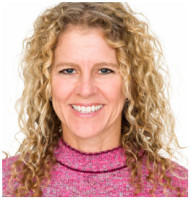 She became immersed in Deaf Culture and American Sign Language at Gallaudet University in Washington, DC, a university for deaf students. Studying and living there was a life-changing experience where Jeannette acquired a deep appreciation for the diversity of human experience. After graduating with a Master’s degree in linguistics, Jeannette returned to Tucson and worked as a sign language interpreter and as faculty at the U of A teaching linguistics and interpreting.

Life as she knew it ended in March, 2002 when her nearly 3-year-old son, Ben, died suddenly and unexpectedly. From this tragedy she created a movement that is familiar to all of Arizona and many other areas of the country: Ben’s Bells.

For over a decade, Ben’s Bells has been infusing the practice of intentional kindness throughout our community. Tens of thousands of citizens are engaged with Ben’s Bells educational programming offered through their studios, schools, workplaces and neighborhoods. Ben’s Bells has become a beloved part of our southern Arizona culture and has spread nationally with studios in Phoenix and Newtown, CT, and the Kind Campus Program is used in hundreds of schools across the country.

Jeannette Maré is forever grateful to the Tucson community for caring for her and her family during the worst time of their lives. She is passionate about engaging with community and giving back in any way she can, knowing that we’re all in this together. The Tucson Rodeo Parade Committee is proud to have Jeannette Maré as the Grand Marshal of the 2017 Tucson Rodeo Parade.

Posted in Parade, Past Grand Marshals, The Latest