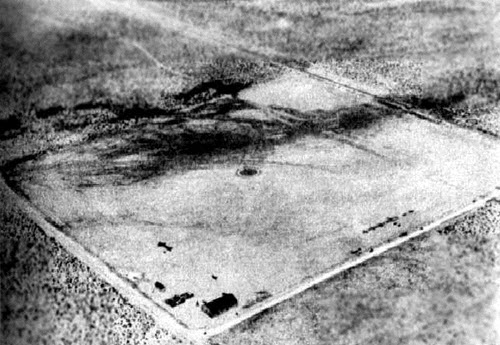 An early-1920s aerial view looking northeast at the “Tucson Municipal Flying Field”,
from the Bert Fireman Collection (courtesy of the AZ Historical Foundation, via Jonathan Westerling).

The very first municipally owned airport in the United States was located at this site in Tucson. The airfield was originally named Macauley Field after Maj. T. C. Macauley, an Army officer well known in Tucson and an early-day U.S. Air Service pilot.

According to a historical plaque placed at the site years later:

“Upon receipt of an official letter from Brigadier General Billy Mitchell of the U. S. Air Services urging the City of Tucson to provide a municipal airport, Mayor O.C. Parker and Allen B. Jaynes, president of the Chamber of Commerce, appointed a Joint Committee consisting of the following members:
City of Tucson: O.C. Parker, R.E. Fishburn, H.S. Corbett, Stanley Kitt, Folsom Miere.
Chamber of Commerce: Allen B Jaynes, Orville S. McPherson, Monte Mansfield, Kirke Moore, C.J. Anderson.
The Committee purchased this 84 acre site from L. H. Manning for $30/acre. A $5,000 loan from the Consolidated National Bank paid for the property and all necessary improvements & airport facilities.”

Another plaque at the site read:

“This Ground was the location of the 1stt municipal airport in the United States. The Tucson City Council approved the financing for the airport on 7/21/19, and the City of Tucson in cooperation with the Tucson Chamber of Commerce established and constructed the airport.”

The July 26, 1919 issue of the Tucson Citizen (according to Jonathan Westerling) provided this additional description:

“The field will be one of the finest in the country, with paving on 2 sides. There is a siding at the field which will be used for postal purposes. The 8-inch well affords an ample water supply at the southwest corner of the field where the hangar, accommodating ten planes and machine shops will be erected. The hangar and the shops will be furnished by the government. The field will be completely enclosed by a barbed wire fence.”

According to the historical plaque at the site:

The Tucson Citizen (according to Jonathan Westerling) reported that on November 20, 1919:

“R. E. Fishburn, member of the aviation committee of the Chamber of Commerce, who is in charge the construction of Macauley, made the 1st landing in one of the Curtis Biplanes of the Barr Flying Circus.” (Fishburn was actually the honorary passenger on this 1st flight, which was piloted by Swede Myerhofer.)

The 82.6 acre airfield was constructed in a joint effort by the city and Chamber of Commerce at the behest of the War Department, which was trying to seal the border from marauders and villianistas, supporters of Pancho Villa.

Later, in 1920, the name of the airfield was changed to Fishburn Field and then to the Tucson Municipal Flying Field. 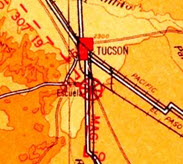 In the airfield’s first four years most of the planes using the field were Army patrol aircraft. Border hostilities eventually waned and in 1923 the Army left and donated the two hangars and a living quarters to the city.
The only aeronautical chart depiction which has been located of Tucson Municipal Airport was on a 1924 Air Navigation Map (courtesy of David Brooks)

Bill Gill reported, “We observed a photograph circa 1925 that showed the hangars in use with multiple aircraft parked on the property. The two hangars displayed the business names ‘Arizona Aircraft Company’ (western hangar) and ‘Airborne Inc.’ (eastern hangar).”

By 1925, the airport was crowded with air traffic. However the strip was too soft and too short for takeoffs by newer, larger planes, so city officials acquired 1,280 acres east of Municipal Field and commenced on building a newer facility. The city moved its airport, including one of the two hangars, in 1927 to the new site, which it named Davis-Monthan Field (still in use today as Davis-Monthan Air Force Base).

The old airport remained open for a few years. Charles Mayse, a barnstormer and pilot-for-hire, leased it in 1927 & ran a flying school and sightseeing tours from it. It was at this point that the field was presumably renamed Mayse Field.
A September 24, 1927, photo of Charles Lindbergh departing from the Tucson Municipal Flying Field.

A September 24, 1927 photo of Charles Lindbergh departing from the Tucson Municipal Flying Field. 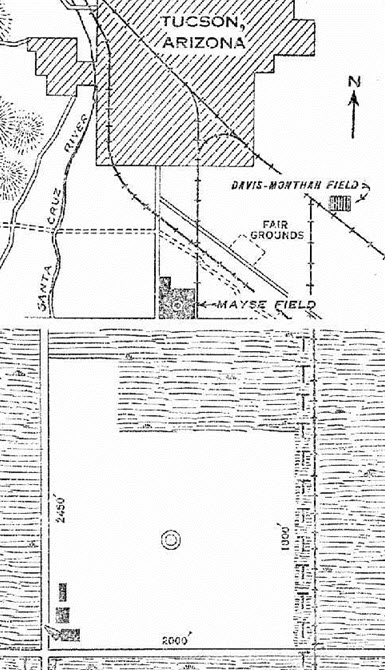 The August 21, 1929, Department of Commerce Airway Bulletin (courtesy of Jonathan Westerling) described Mayse Field as a commercial airfield owned by the city, and operated by the Mayse Air Service. The field was said to consist of an 80-acre, 2,000 square foot gravel field. A 120 x 60 foot hangar (marked with “Mayse Airport”) and two other buildings were depicted on the southwest corner of the field.

The 1931 Commerce Department Descriptions of Airports and Landing Fields in the U.S. (according to David Brooks) described Mayse Field as a commercial field consisting of an 80-acre irregularly shaped gravel field, measuring 2,000 x 1,800 feet, with a single 2,450 foot north/south runway. “Mayse Airport” was marked on top of a hangar.

Charles Mayse ran the field until the city closed it in 1933, when the Rodeo Grounds were relocated to the site of the airport.

A 1958 aerial view showed that the fairground & rodeo grounds had taken over the site of the former airport.
An undated photo (from a 1970s issue of the Tucson Citizen, courtesy of Jonathan Westerling, enhanced by Bill Grasha) of a flagpole which stood at the site of the Tucson Municipal Flying Field which contained a historical plaque installed in 1933, when the Tucson Rodeo was moved back to the site. 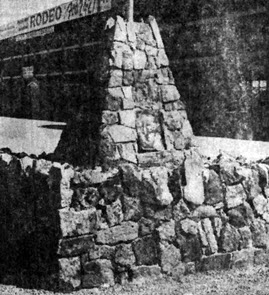 An undated photo (from a 1970s issue of the Tucson Citizen, courtesy of Jonathan Westerling, enhanced by Bill Grasha)
of a flagpole which stood at the site of the Tucson Municipal Flying Field which contained a historical plaque
installed in 1933, when the Tucson Rodeo was moved back to the site. 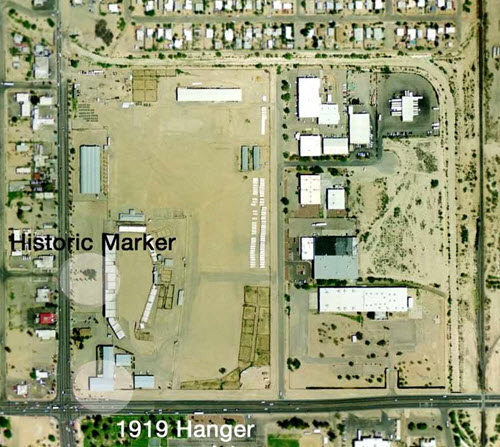 The 2002 USGS aerial photo of the site of the former Tucson Municipal Airport has been annotated by Jonathan Westerling to show the location of the historical marker & the former hangar. There are no discernible remains of any runways. 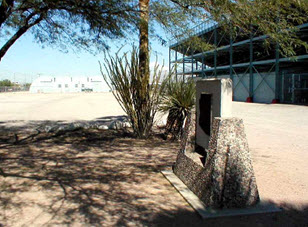 A November 2004 photo by Jonathan Westerling of the historical
Marker at the site of the former Tucson Municipal Airport. 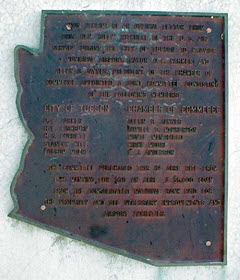 A November 2004 photo by Jonathan Westerling
of the plaque on one side of the historical marker. 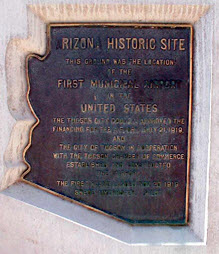 A November 2004 photo by Jonathan Westerling
of the plaque on the other side of the historical marker. 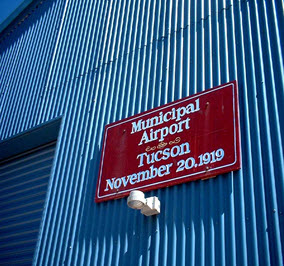 A March 2012 photo by David Westerling of the sign commemorating the November 20, 1919 hangar of the Tucson Municipal Airport.

Jonathan Westerling observed, “The city has restored the hangar, retaining the original steel beams and frame. The outside cladding on the hangar has been replaced. Thankfully the sign commemorating the significance of the structure was also repainted and affixed to the outside of the building.” 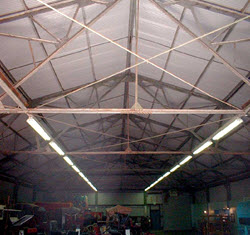 A March 2012 photo by David Westerling of the interior of the 1919 hangar of the Tucson Municipal Airport.

The site of the Tucson Municipal Flying Field is located northeast of the intersection of South 6th Avenue & East Irvington Avenue.