The world’s longest non-motorized parade!
Did I hear someone say “Parade?”

This colorful, exciting Parade is presented each year and keeps the spirit of the first Parade back in 1925.

Now known to be the largest Non-Motorized Parade in the country, It still achieves its success through the community’s participation and the dedicated work of its volunteer members.

The Parade begins at 9 am. Parade route begins on Ajo Highway 1/2 mile east of Park Ave. going east to Park Avenue, then south on Park to Irvington Rd., west on Irvington to Sixth Avenue and north on Sixth to the North end of the Tucson Rodeo Grounds. The Judges and Reviewing stands are located on the North side of Irvington close to Sixth Ave. Grandstand seating is on Irvington Road. Seating in this area requires ticketing which can be purchased at Ticket Booths near the Grandstands or in advance at The Rodeo Parade Office.

Parking is available near the Rodeo Grounds but is on a first-come basis. Plan to arrive early as grandstand pre-parade entertainment begins at 8AM. The present Parade is being held to 200 entries, with emphasis on quality rather than quantity. In the year 2000, the Tucson Rodeo Parade celebrated it’s 75th year – “Diamond Jubilee”.

The History of the Parade
In 1924, Frederick Leighton Kramer, President of  the Arizona Polo Association and later recognized as the Founder of the Tucson Rodeo and Rodeo  Parade, gathered a group of local business men to discuss the possibility of having a Rodeo. This group included C. James and Albert H. Condron, President and Secretary of the Chamber of Commerce, respectively. Also Monte Mansfield, a local car dealer, M. H. Starkweather, Architect, “Jack” J.C. Kinny and Bud Parker, local and well respected cattlemen, were present at the meeting.
read more about Tucson and the Parade
This was the inspiration and moving force that made it possible for the Tucson Rodeo and Tucson Rodeo Parade to take place on February 21, 1925.In “Progressive Arizona – 1925”, Kramer observed, “The City of Tucson excelled itself the day of its first Rodeo Parade called “La Fiesta de los Vaqueros”. The first Parade was led by Major Nuestatter, Tucson’s veteran Parade Leader, followed by the Band of the 25th Infantry from Nogales. Next was the Platoon of the Reserve Officers Unit, Polo Players, cowboys and cowgirls, buggies, wagons, Indians and lastly the Band of the 10th U.S, Cavalry from Ft. Huachuca. 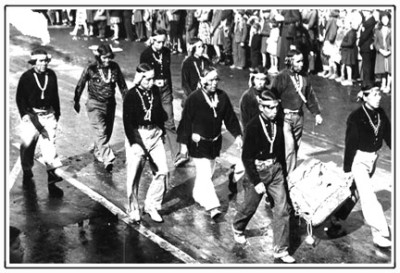 The Parade moved east along the entire length of Congress Street, south on 5th Ave. to Broadway, down Broadway to Stone and North on Stone to E. Alameda Street where the Parade disbanded. Thousands of spectators crowded the Parade route watching more than 300 entries. The present Parade is being held to 200 entries, with emphasis on quality rather than quantity. In the year 2000, the Tucson Rodeo Parade celebrated it’s 75th year – “Diamond Jubilee”.