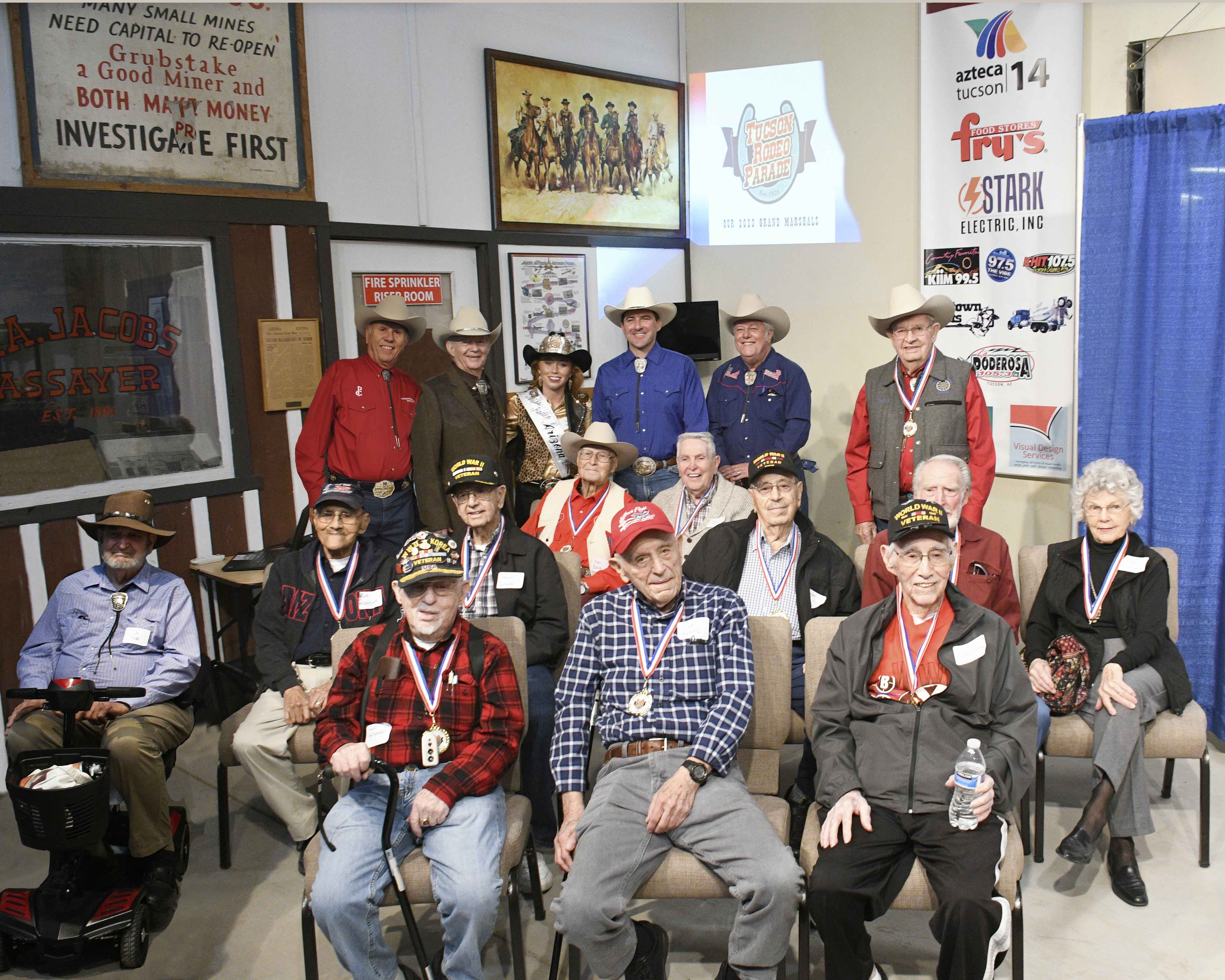 They have been called “The Greatest Generation.” They left family, friends, and loved ones, put their lives on hold and answered their country’s call when it needed them most to help save the world from tyranny. They fought on the continents of Europe, Asia, and Africa and in the Atlantic and Pacific Oceans. At various times, their service was carried out under severe winter conditions, in the harshest of deserts, and in the hottest, most humid tropical climates. They are the Veterans of World War Two.

Their numbers are dwindling. Of over 16 million members of the U.S. Armed Forces during WWII, less than 390,000 are estimated to be alive. To honor these American heroes, The Tucson Rodeo Parade Committee names World War II Veterans Grand Marshals of the 2020 Tucson Rodeo Parade.

We are honored to have several WWII veterans participating in the parade this year. These are men and women with local ties to the Tucson community.

Don Sloane – A New York City native, 18-year-old Don enlisted in the Army and was deployed in Europe from 1945-1948 as part of the Occupation forces. After the war, Don moved to Tucson, and went into the furniture business. He changed to selling Army Surplus goods, and has been proprietor of Miller Surplus since 1956.

Red Hollander – Red was born in Pittsburgh, PA and was drafted into the Navy at age 18. He served during WWII and after being discharged, moved to Tucson. He re-enlisted in 1947 and served during the Korean Conflict. After his final discharge in 1954, he was a U.S. Postal worker until his retirement. His son Rick is a member of the Tucson Rodeo Committee.

Walter Ram – Walter is a Nogales native who was a radio operator and gunner on a B-17 bomber. His squadron completed five bombing missions without incident, but on his sixth, his plane was shot down. He was captured and spent nearly two years as a prisoner of war before being liberated in May, 1945. After the war Walter ran a successful trucking company and a distributorship out of his hometown of Nogales until his retirement.

Mike Lude – Mike served in the Marine Corps in the Pacific theater and after the war established himself as a college football coach at Hillsdale, Maine, Delaware and Colorado State; and Athletic Director at Kent State and Washington. He retired to Tucson in 1995.

Gwen Niemi – Gwen served in the Women’s Army Auxiliary Corp during the war. After her service, she spent over 25 years teaching at the University of Arizona and Tucson Unified School District.

Gilbert (Rod) Rodriguez – Rod, a Tucson native, served in the Army Air Corp and U.S. Air Force in both WWII and the Korean War. He was an aircraft engineer mechanic at Davis Monthan Air Force Base for over 30 years.

The Committee thanks Kathy and Thom Mansur for their help in arranging for these veterans’ participation. Kathy and Thom facilitate the Southern Arizona Honor Flight that takes veterans of WWII, Korea and Vietnam to visit the war memorials in Washington, D.C.