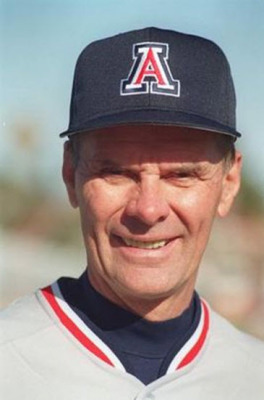 He played basketball and baseball at the University of Minnesota. In 1956 Kindall was an All-American member of the Gophers baseball team that won the College World Series Championship, ironically defeating Arizona, a team he would later lead to three NCAA championships. He spent eight years as an infielder in the Major Leagues with the Chicago Cubs, Cleveland Indians and Minnesota Twins. He coached as an assistant at Minnesota until 1972 when he became head coach at Arizona. He led the Wildcats to the College World Series five times and to National Championships in 1976, 1980, and 1986 and was named National Coach of the Year those same years. He remains Arizona’s all-time winningest coach.

Coach Kindall has been inducted into the University of Minnesota, University of Arizona, and the College Baseball Coaches’ Halls of Fame.

Since his retirement, Kindall has kept involved with the game he loves as a Senior Advisor with USA Baseball, giving instructional clinics and coaching internationally, and broadcasting baseball for ESPN and Fox Sports. He has authored one book and four videos on baseball coaching and instruction, and served as editor of The Science of Baseball and The Baseball Coaching Bible.

The Jerry Kindall Character in Coaching Award is presented annually by the Fellowship of Christian Athletes to the college or high school baseball coach that best exemplifies the Christian principles of character, integrity, excellence, teamwork and service on and off the baseball field.

He remains involved in the Fellowship of Christian Athletes, Ministry of Young Life, and is an elder at Catalina Foothills Presbyterian Church.

Posted in Past Grand Marshals